Source: Wikiwand. Wall painting at the Temple of Aaron and the consecration of the Tabernacle. Synagogue at Dura Europos.

Welcome to the research guide for ancient Jewish archaeology! 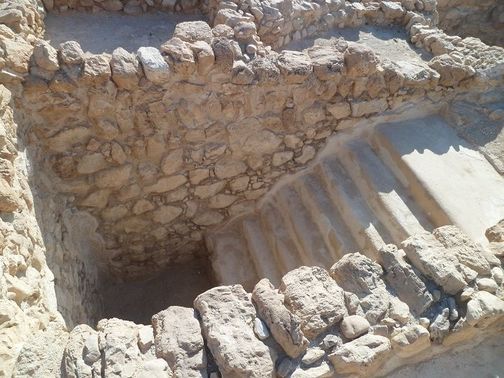 What is archaeology? Simply put, it is the study of past human societies and their environments through the systematic recovery and analysis of material culture and physical remains. The primary aims of archaeology are thus: to recover, record, analyze, and classify archaeological material; to describe and interpret the patterns of human behaviors that lead to its creation; and to explain or develop an understanding of the reasons for this behavior.

Because archaeology is not repeatable—that is to say, once a site is excavated, it can never be excavated again—this means that finds must be closely and carefully analyzed and recorded. Finds are usually dated stratigraphically (the goal of stratigraphy is the subdivision of a sequence of rock strata into mappable units, determining the time relationships that are involved, and correlating units of the sequence—or the entire sequence—with rock strata elsewhere).

"Jewish archaeology" is a term that has been used very sparingly during the past half century. It was popular, however, during the period between the end of World War I and the early 1950s. Jewish archaeology was used by Jewish scholars to describe ancient Jewish remains of the Greco-Roman period—from the ruins of Herod's Temple and ancient coins, synagogue remains, tombs, and villages. In ancient Jewish archaeology, specifically, archaeologists investigate how ancient Jews understood and observed practically the words of the Torah. We look to both textual and archaeological evidence, bearing in mind that texts should neither be taken at face value, nor imposed onto material culture.

This research guide will serve as a brief introduction to ancient Jewish archaeology, through topics such as ritual baths, chalk vessels, imported pottery, and more.

*Note: To view the sources of images whose source is not specified, click on the image (this will take you to a separate window).