The four species of Sukkot, the Festival of Booths, are the etrog (citron), palm, myrtle, and willow. The Jewish people are commanded to bind the four species together and wave them in the Sukkah, a temporary booth constructed for use during the seven-day-long festival of Sukkot. In 69 C.E., during the fourth year of the great Jewish revolt against Rome, the rebels minted a new coin which depicted the Four Species. The Four Species became a prominent motif on coins minted that year and appeared in several varations; for example, an etrog between two bound lulavim, a lulav between two etrogim, and more. Less than seventy years later, the Bar Kokhba rebellion also minted coins which featured the Four Species. 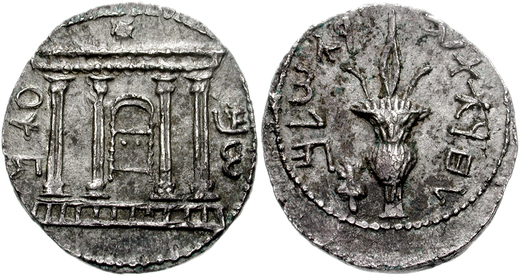