Abridged and appended from Encyclopedia Britannica. 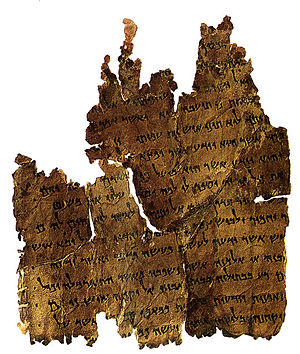 Damascus Document, in full The Document Of The New Covenant In The Land Of Damascus, also called Zadokite Fragments, is one of the most important extant works of the ancient Essene community of Jews at Qumrān in Palestine. The Essenes fled to the Judaean desert wilderness around Qumrān during Antiochus IV Epiphanes’ persecution of Palestinian Jews from 175 to 164/163 BCE. Though a precise date for the composition of the Damascus Document has not been determined, it must have been written before the great Jewish revolt of 66–70 CE, which forced the Qumrān community to disband.

Two medieval manuscripts dating from the 10th and 12th centuries were discovered in 1896–97 in the geniza (storeroom) of the Ezra synagogue in Cairo. They were published under the title Fragments of a Zadokite Work because members of the Essene community also called themselves Sons of Zadok (the Righteous One). The subsequent discovery of extensive Hebrew fragments from caves IV and VI at Qumrān confirmed that the document was indeed one of the major doctrinal and administrative codes of the Essene sect.

The Damascus Document consists of two major sections. The “exhortation” sets forth the sect’s religious teaching, emphasizing fidelity to God’s covenant with Israel and strict observance of the sabbath and other holy days. It also introduces the sect’s enigmatic leader, the Teacher of Righteousness, whom scholars have not been able to identify. Opposed by the Wicked Priest (possibly either of two high priests of the Hasmonean dynasty in Jerusalem: Jonathan, 152–143/142 BCE, or Alexander Jannaeus, 103–76 BCE), he was persecuted and exiled. The sect believed that a messianic age would commence 40 years after the death of the Teacher. The second section contains a list of statutes dealing with vows and ritual purity, guidelines for community assemblies, the selection of judges, and the duties of the Guardian, who controlled the admission and instruction of new members.

Manual of Discipline, also called Rule Of The Community, or The Community Rule, is one of the most important documents produced by the Essene community of Jews, who settled at Qumrān in the Judaean desert in the early 2nd century BCE. They did so to remove themselves from what they considered a corrupt religion symbolized by the religiopolitical high priests of the Hasmonean dynasty centred in Jerusalem. The major portion of the scroll was discovered in Cave I at Qumrān in 1947, and fragments of 11 other versions of the Manual were found in Caves IV and V the same year. Modern scholars have suggested that, when the Qumrān sect was forced to abandon its community life because of the great Jewish revolt against Rome in 66–70 CE, its members hid their library in nearby caves. The large number of preserved manuscripts indicate the importance of the Manual to the Essene community.

This scroll was probably intended for the Essene sect’s leaders, including priests who supervised the sacrificial, liturgical, and possibly exegetical religious functions, and also guardians who controlled the admission and instruction of new members into the community. The document contains an explanation of the sect’s religious and moral ideals, a description of its admission ceremony, a long catechetical discourse on its mystical doctrine of the primordial spirits of truth and perversity, organizational and disciplinary statutes, and a final hymn or psalm praising obedience and setting forth the sacred seasons. The first of two appendices, the Rule of the Congregation, or “Messianic Rule,” contains additional statutes and instructions about a messianic feast. The second is a liturgical collection of benedictions: Blessings.

Although this work cannot be dated with precision, it was probably compiled after the community had settled in Qumrān. Some scholars have connected part of it to an enigmatic figure, the unknown Teacher of Righteousness, whose ministry within the community probably fell in the latter half of the 2nd century BCE. 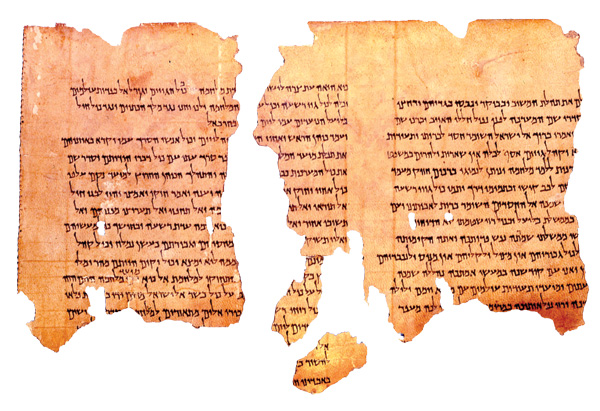 The War Rule, discovered in Cave I of Qumrān in 1947, is a manual for military organization and strategy, including detailed specifications for battle gear and signals. It is also a theological discourse that develops the doctrine of the spirits of truth and perversity mentioned in the sect’s Manual of Discipline. The scroll’s apocalyptic portrayal of a 40-year “holy war” between the forces of good and evil involves heavenly as well as earthly soldiers. The elect of Israel are joined by an angelic host, while the devil and the evil angels fight alongside other nations of the Earth. The victory of the forces of light was to signal the final destruction of evil, after which the God of Israel would rule eternally in justice.

Most scholars identify the enemy “Kittim” of the scroll as Romans, who invaded and occupied Judaea in 63 BCE. If this is so, the major sections of the scroll (probably a composite work) were written after that date but before 68 CE, when the Qumrān community was disbanded because of the Jewish revolt of 66–70 CE.