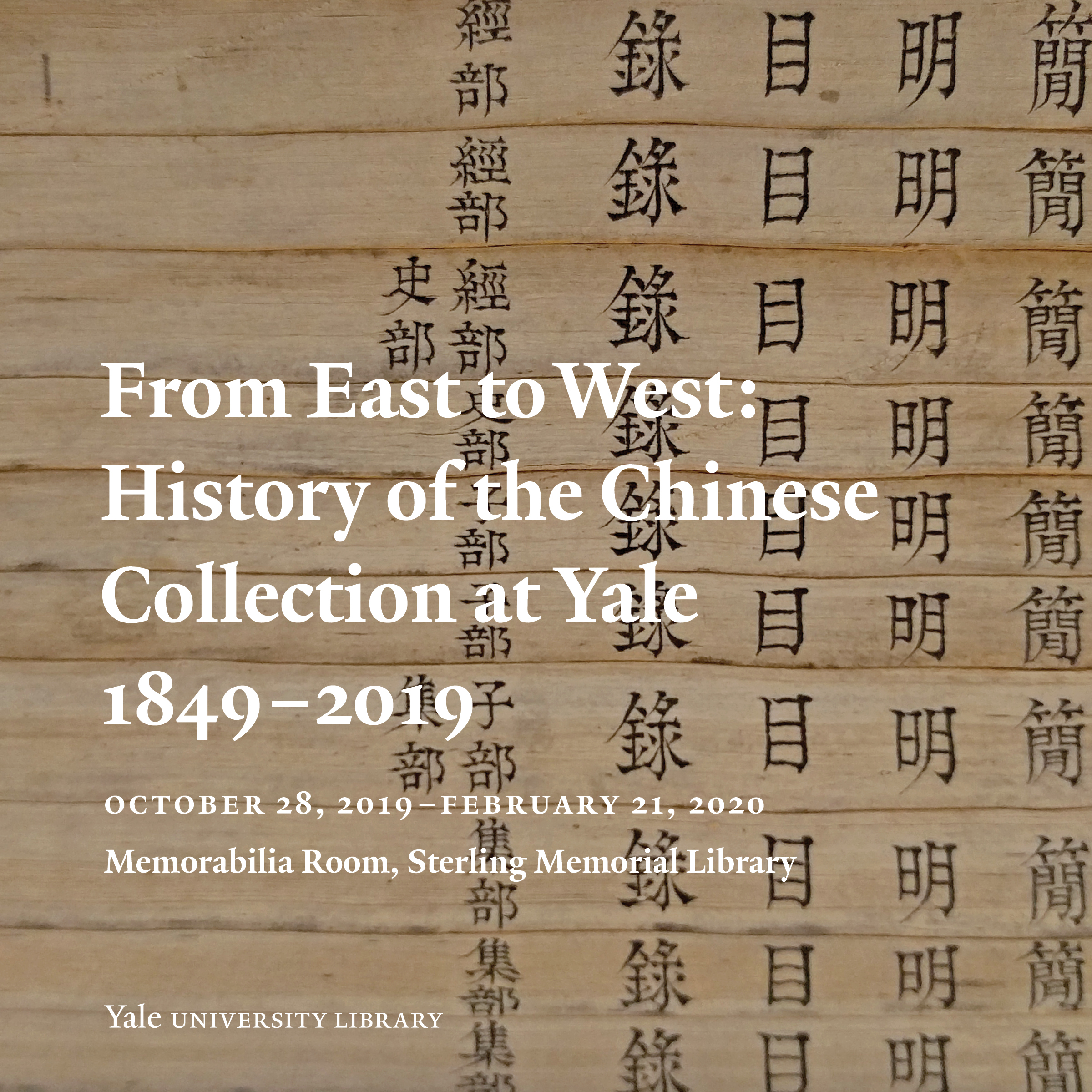 From East to West: History of the Chinese Collection at Yale 1849–2019

Yale University Library has been collecting Chinese-language materials for 170 years. Six titles of Chinese classical texts were deposited at Yale in August 1849, making the College Library the first academic library in the United States to collect Chinese-language books. Samuel Wells Williams, the inaugural Professor of Chinese Language and Literature at Yale, was largely responsible for the earliest acquisitions for the Library. Yung Wing, the first Chinese citizen to graduate from a major American college, was the most important contributor to the founding of Yale’s Chinese Collection. He intended for the Chinese Collection to promote the study of China, and consequently to enhance mutual understanding and cultural exchange between Chinese and Americans.

Many Yale faculty members have contributed greatly to the development of the Chinese Collection. Professors Samuel Wells Williams and Frederick Wells Williams donated their joint personal library. Professor George Alexander Kennedy purchased books for the Library when he traveled to China. Professors Arthur Frederick Wright and Mary Clabaugh Wright contributed to the rapid growth of the collection during the 1960s and 1970s. Most importantly, since its founding in 1961, the Council on East Asian Studies has played a critical role in supporting this world–renowned treasure trove of Chinese resources.
With the generous support of alumni, faculty, and the Council, the Chinese Collection at Yale has expanded to one of the finest and largest collections of its kind outside China. This exhibit records the history of the books and contributors to the collection over the past 170 years. Valuable items from the East Asia Library, Manuscripts and Archives, Sterling Memorial Library, Beinecke Rare Book and Manuscript Library, and the Haas Family Arts Library showcase the efforts and achievements made collaboratively by students, faculty, and librarians at Yale. 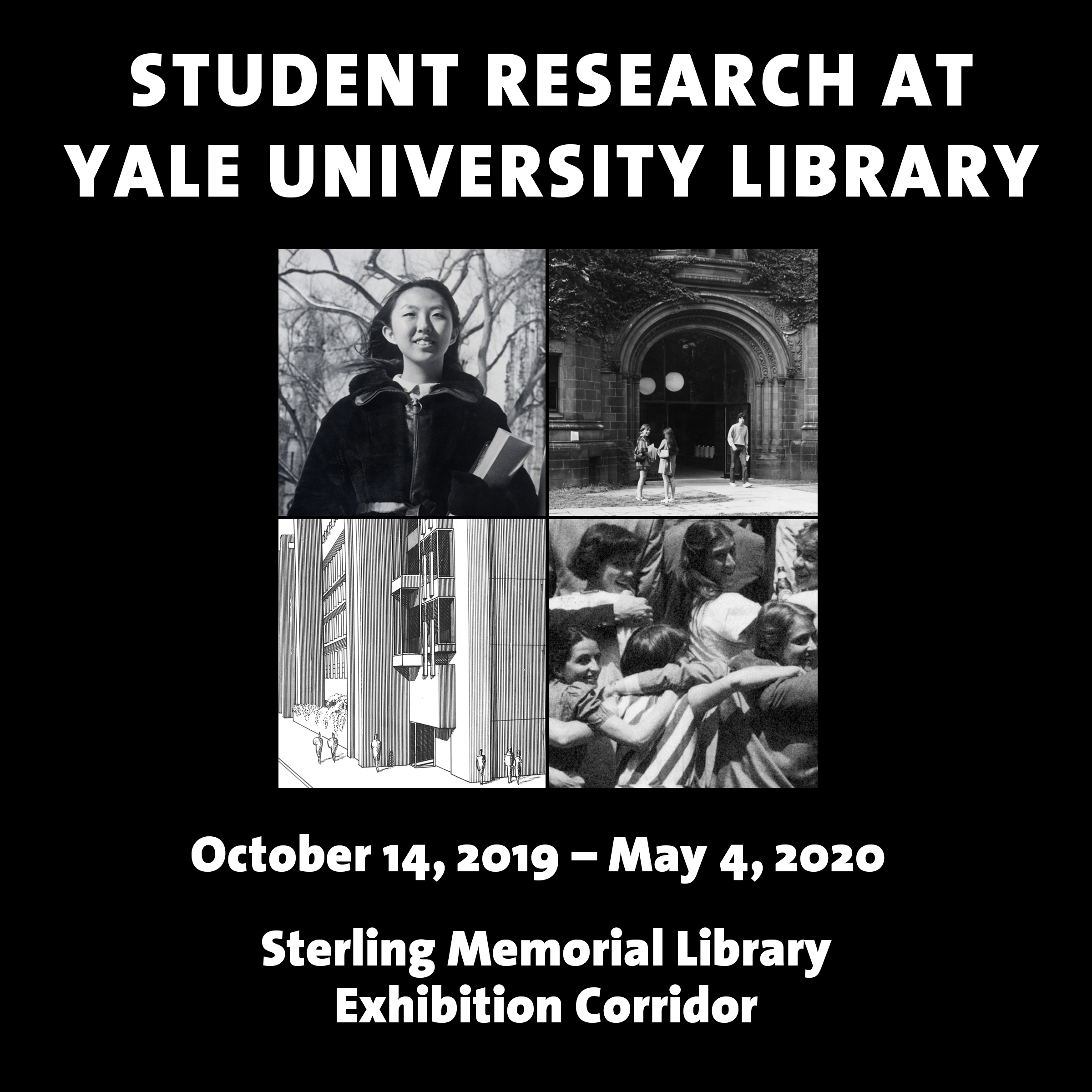 Student Research on the History of Women at Yale

In conjunction with the 50 Women at Yale 150 campus-wide celebration, two Yale College seniors have curated side-by-side exhibits on two different aspects of women at Yale using materials from library collections.

Valentina Connell's exhibit looks at the evolution of housing policy and residential life in Yale College over the past fifty years, since the first undergraduate women were admitted in 1969. Based on research in the library's Manuscripts and Archives Department, the exhibit shows that residential life was one of the most difficult aspects of gender integration. Residences were overcrowded, and the first women undergraduates, still a small minority on campus, felt isolated.

Mariana Melin-Corcoran's exhibit explores the history of women's involvement in the Yale School of Architecture. The Yale School of Fine Arts enrolled women students from its opening in 1869, but restricted them to more traditional courses of sculpture and painting. When the Department of Architecture was inaugurated in 1916 and until the late 1940s and early 1950s, only men were allowed to enroll. Among the first women architecture graduates were Leona Anneberg Nalle (M.Arch 1956) and Estelle Margolis (B.Arch. 1955). In 2016, the School of Architecture appointed its first female leader, Dean Deborah Berke.