This guide presents an overview of bookplates and the Yale Bookplate Collection. 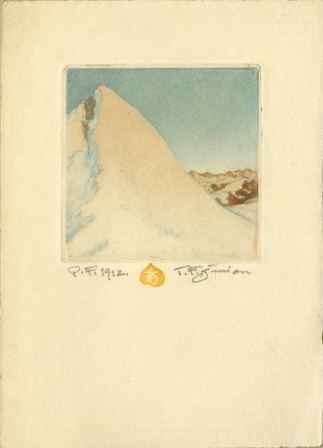 Other types of small graphic works were often collected alongside bookplates. This is a century-old New Year’s card by Czech artist T.F. Šimon (1877-1942). “P.F.” is an abbreviation for the French phrase pour féliciter, which was adopted in Czech and Slovak as a kind of shorthand for expressing New Year’s wishes. The artist’s distinctive monogram and signature appear beneath the image.

The Yale Bookplate Collection is a significant resource for both historical and artistic research—equally rich for someone interested in the visual culture of a particular time and place as well as someone seeking hands-on study of printmaking techniques.

Here are some starting points for approaching bookplate research:

You might consider any or all of the following:

See below for selected collections organized around suggested themes.

Some possible themes by which to explore bookplate collections at Yale include:

This list represents the majority of archival holdings that make up the Yale Bookplate Collection. When available, links to finding aids and estimated dates are also provided in the document.