An interdisciplinary course guide highlighting resources for your projects.

A helpful resource for finding executive, legislative, and judicial publications ...

ProQuest Congressional collects congressional documents from 1789 to the present in both the House of Representatives and the Senate. Congressional hearings are one of the best features of this database, alongside the CRC (Congressional Research Service) reports. It can be used to study both historical and contemporary issues that have coverage at the national level.

For this first ProQuest Congressional Search, we will look at China Daily News, a news source that circulated before the early 1950s, when it was shut down after an investigation. An article by historian Charlotte Brooks about Chinese Americans' responses to the Red Scare in the early 1950s provides this context:

In late 1950, federal officials gained even greater leverage over the community when President Truman used the 1917 Trading with the Enemy Act to impose economic sanctions on the People’s Republic of China. In New York, the Treasury Department invoked the act to bring criminal charges against the editors and staff of the leftist China Daily News for running advertisements for Hong Kong branches of People’s Republic of China-backed banks. Convicted in 1954, the paper’s editor Eugene Moy died in prison, while many on his staff returned to China.

ProQuest Congressional provides two types of documents: Hearings and the Congressional Record. There is one occurrence of "China Daily News" (note that I searched this in quotation marks to search as a phrase). The record for the hearing is from 1952, two years before Moy's conviction. Let's take a look at this record, as it seems promising. 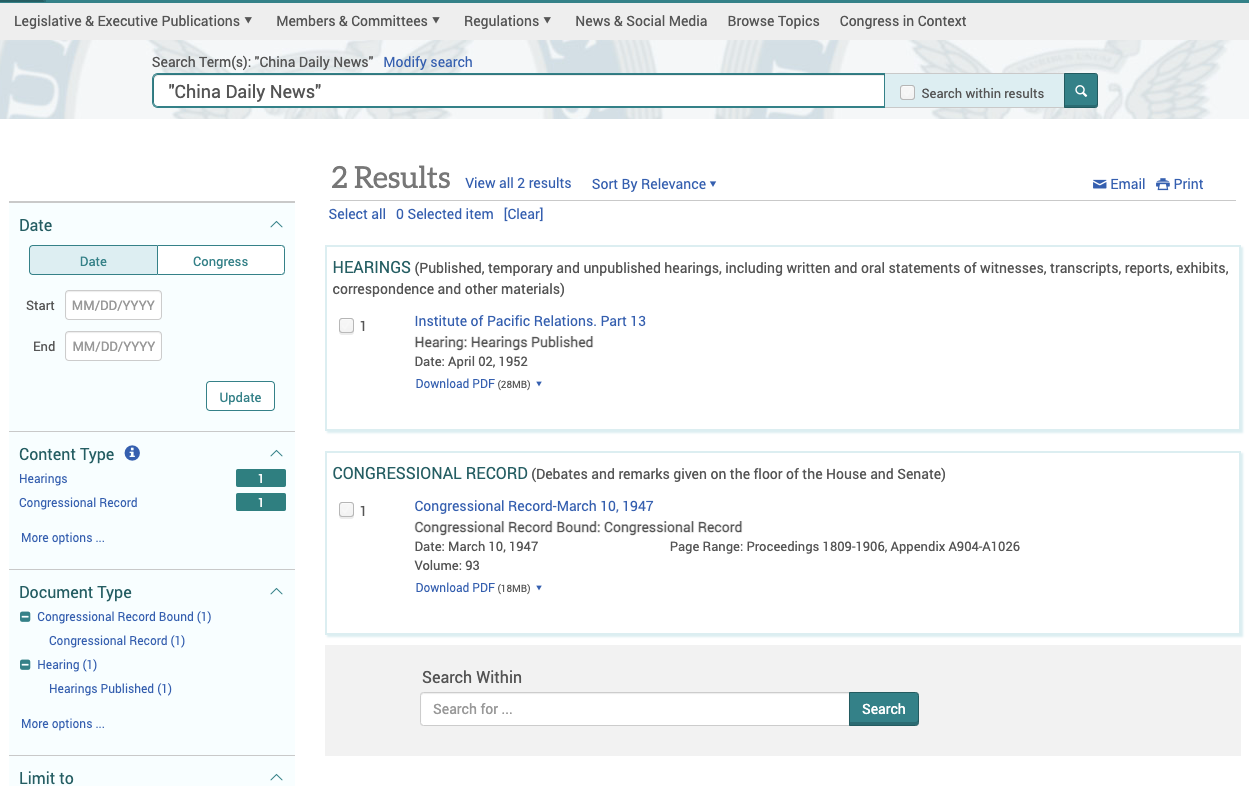 The record for the hearing informs us about the date, the committee, and the source record. It provides descriptive terms and lets us know who the witnesses are. Because this is an older record and not born-digital content (as it dates back to when computers took up entire rooms), the scanned document takes up a lot of space, and we can download subsections of it if we want. On older documents like this, the OCR (optical character recognition) can be hit or miss, so we recommend searching iteratively on a few terms if you're trying to find something in a document. 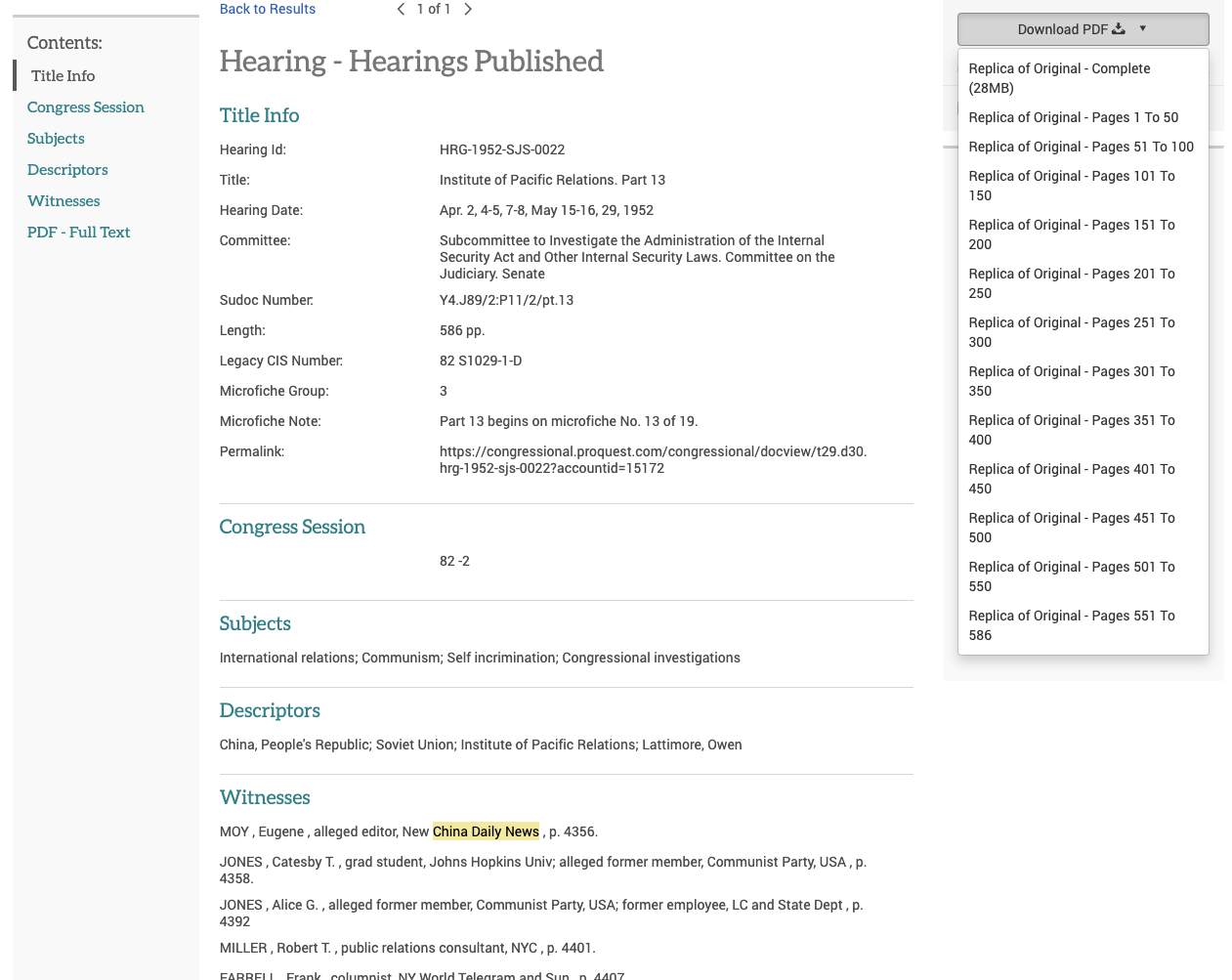 In this case, the document begins with the hearing content. 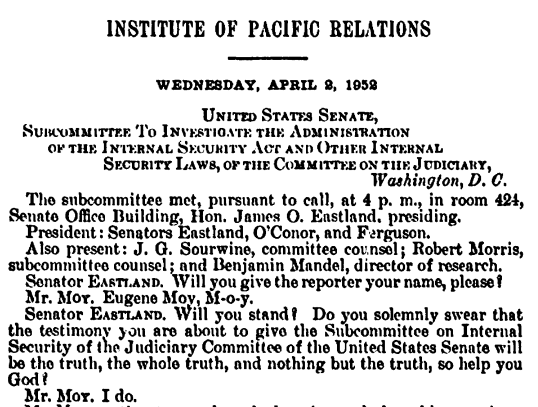 In our second search, we will look up something much broader — a search that is very similar to the course title, "Asian Americans" AND STEM. Here, we are putting "Asian Americans" in quotation marks so the term matches what we need in our results. If we didn't put that in, we would see disconnected occurrences of each of the terms Asian and American. Using the AND operator explicitly tells ProQuest that we want to search for this term where it co-occurs with STEM. 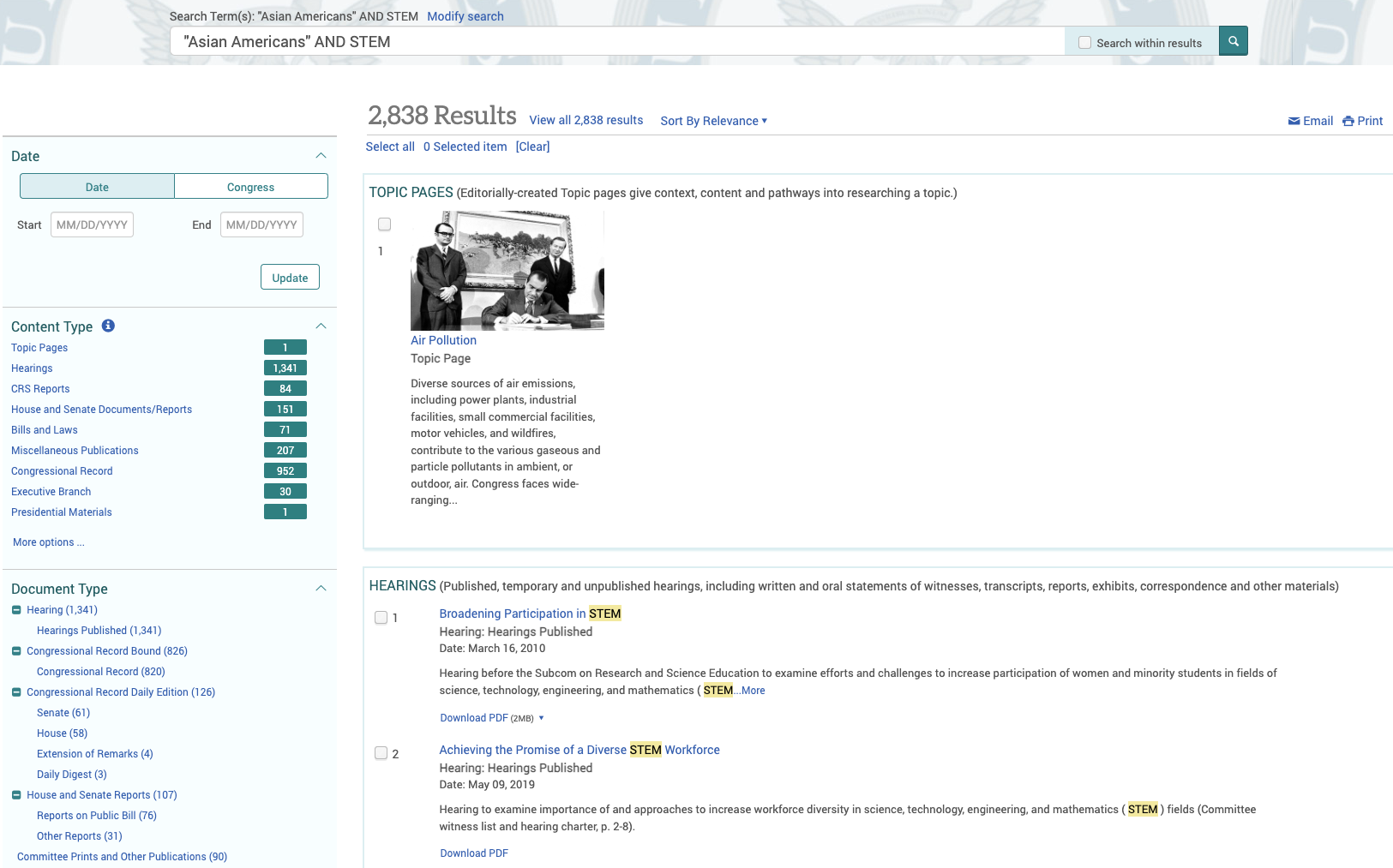 Our search results here are very different. The main search page shows us hearings, Congressional Research Service reports, House and Senate documents and reports, and other types of publications. We can also see where bills and laws halted in the legislative process — with a tracking bar — in the House and Senate during various congressional sessions.

As before, we can click through to see more information about specific items. You can also view all results in any of the categories. Documents from the past twenty years or so are often digital-first, so searching within documents is easier than for older publications.

GovInfo is a service of the United States Government Publishing Office (GPO). It provides free public access to official publications from all three branches of the federal government, and it replaced an older tool called FDsys.

What is the GPO? According to GovInfo, "The Government Publishing Office (GPO) is a Federal legislative branch agency established in 1861. GPO’s mission is rooted in legislation codified in Title 44 U.S.C. and is Keeping America Informed as the Official, Digital, and Secure source for producing, protecting, preserving, and distributing the official publications and information products of the Federal Government."

What doesn't it include? In our Very Online age, there's often a disconnect between what we think of as a publication (like a website) and what is a traditional publication. This came to a head in 2016 with DataRescue, an international effort to preserve climate science data in case it went offline, a fear sparked in part by a similar issue that had happened in Canada several years earlier (when data was actually lost). The Internet Archive hosts archival versions of many government websites in its WayBack Machine. Only content that can be crawled without a login is there, so a lot of multimedia content from the current Internet is missing.

Here are a few searches that demonstrate what GovInfo has in it.

In the first search, we're looking for documents related to the IceCube experiment. 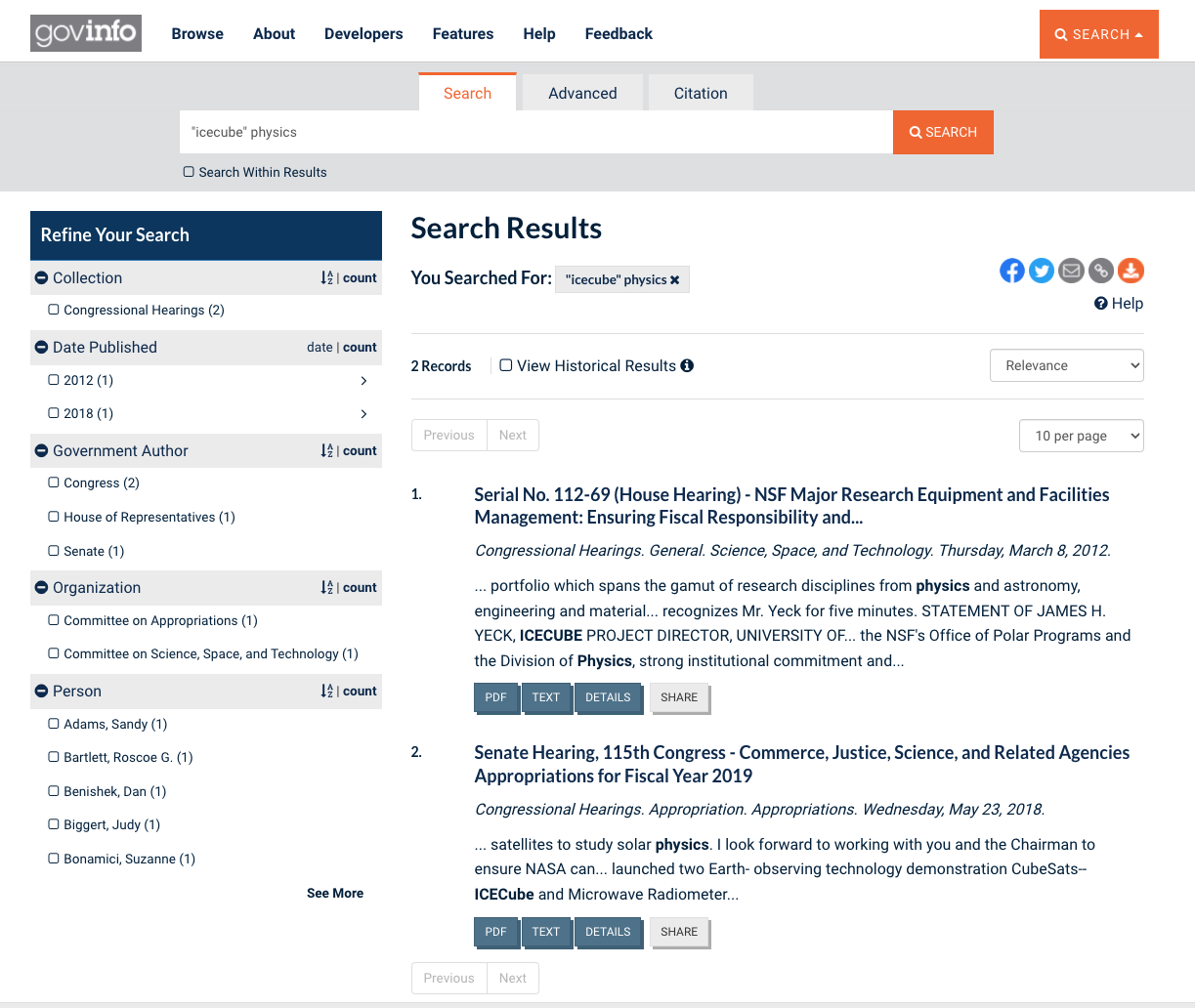 In the second search, we want to find government documents connected to Steven Chu, a physicist who won the Nobel Prize for developing methods to trap atoms with lasers. He became the Secretary of Energy during the Obama administration. This search shows that, when someone is noteworthy (according to the site), you can use a person filter on the left to refine to things related to a specific person. 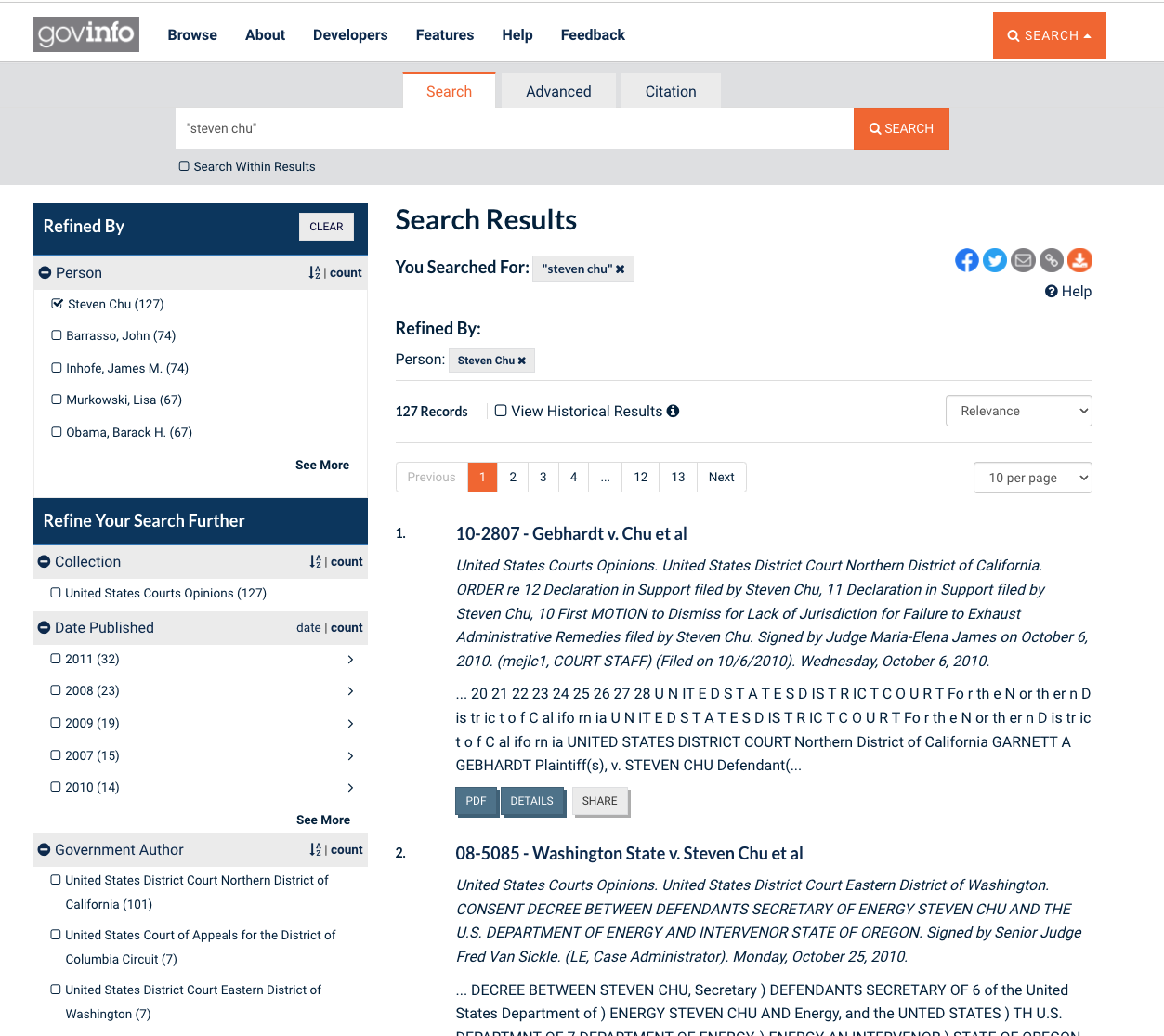 One excellent way to search for government documents at the local, state, or federal level is to use the site: operator to do a government documents search. Here, we're looking for how the book Counseling the Culturally Diverse by Derald Wing Sue is used in government publications. We want to see, qualitatively, the positive impact that the work has had in the public sphere.

Our first search is this:

If we look at the results, we will see one major problem: The NIH's PubMed interface and the Department of Education's ERIC interface both show citations and full text to literature in their respective fields. These do, unfortunately, have .gov domains.

Here's how to fix that: 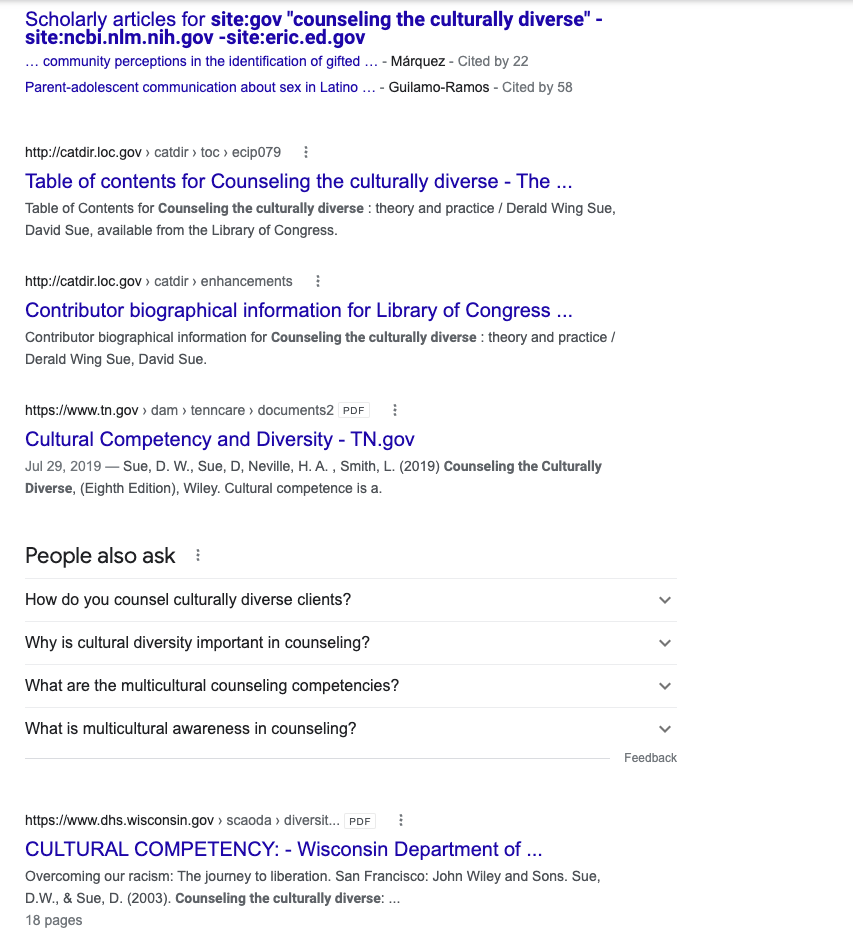 In the above search, I have removed the results coming to us from those two resources. Now, we are seeing this book being cited in a variety of PDF documents, primarily at the state level. In the results Google showed to me while doing this search (remember, Google customizes results based on tracking info), there is a document called "Advocates for Children and Youth Re: Senate Bill 905" on a Maryland government site.

If I add the word bill to my search results in quotation marks (yes, Google wants to synonym bill with the name William, and we need to stop it), the search becomes this: 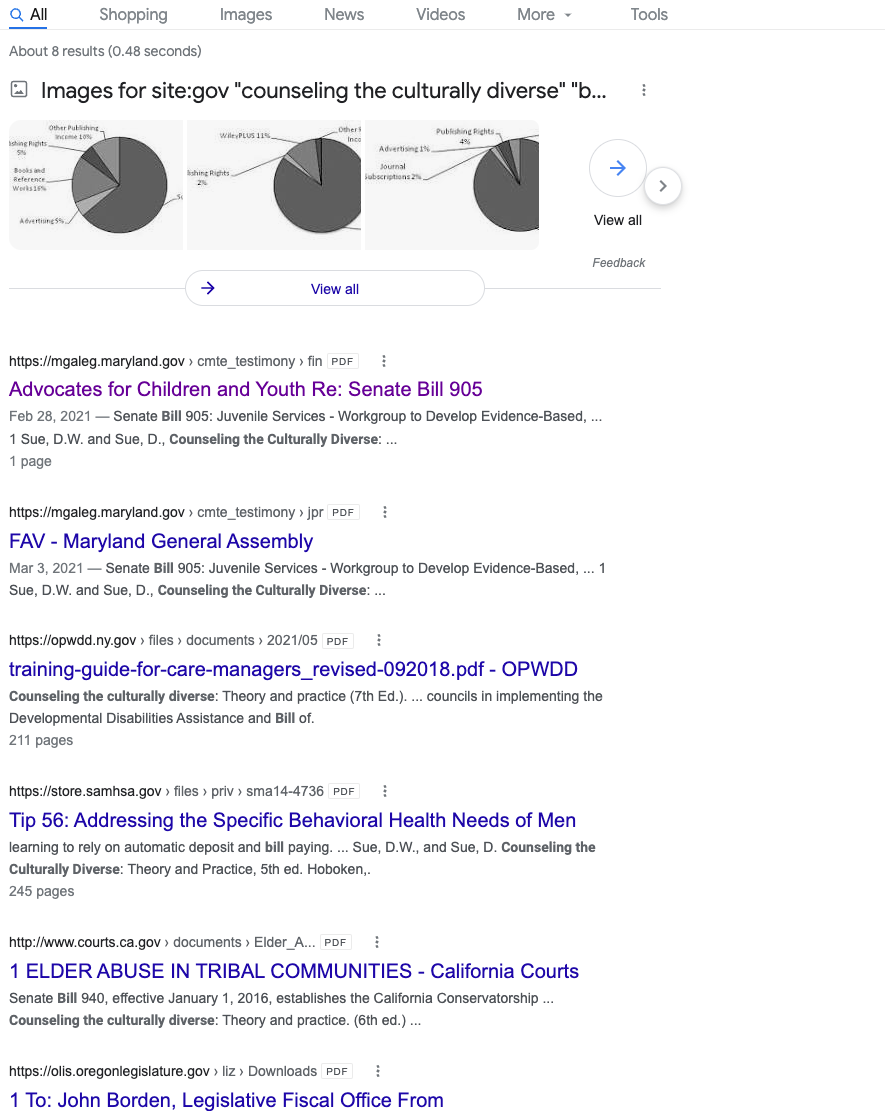 Yale also has the DDRS microfiche set of declassified documents, which is searchable through a CD-ROM index (available at the Marx Science and Social Science Library). A print index is also available: 1975-1985, and 1986-2005. The CD-ROM and print indexes have the same content, so there is no need to search both indexes in order to locate documents in the microfiche set. Computers at Marx Library have CD-ROM drives and can be used to review the CD-ROM index. Microfiche readers are available in Sterling Memorial Library.