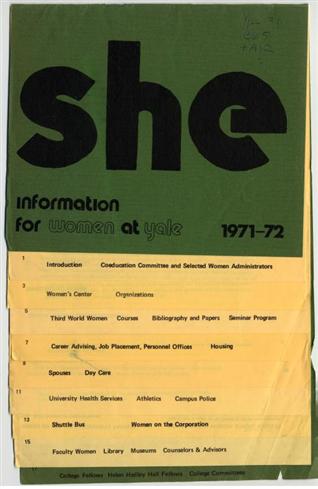 A Short History of Coeducation at Yale

For one hundred and fifty years, women have been a part of the Yale University community as graduate and professional students. In 1869, the School of Art opened as the University’s first coeducational school, and Alice and Susan Silliman – both daughters of notable Yale professor Benjamin Silliman, Jr. – were among the students in its first cohort. Over time, Yale’s other graduate and professional schools began to admit women students. However, women would not be allowed to matriculate to Yale College until the end of the 1960s.

In 1966, Yale President Kingman Brewster, Jr. proposed establishing a women’s coordinate college at Yale, modeled after institutions such as Radcliffe College at Harvard University, Pembrooke College at Brown University, and Barnard College at Columbia University. From December 1966 through November 1967, Brewster and Alan Simpson, president of Vassar College (at the time a women’s college), entertained the idea of moving Vassar to New Haven to be a coordinate college for Yale. Vassar's faculty and alumnae vigorously protested the idea, and ultimately the proposal was unanimously rejected by Vassar's board of trustees, ultimately paving the way for the admission of women at Yale College.

In September 1969, the first undergraduate women arrived at Yale College—230 freshmen matriculated as part of the Class of 1973, 151 sophomore transfer students joined the Class of 1972, and 194 junior transfer students became members of the Class of 1971.  Most of the freshmen women lived with their male classmates on the Old Campus, the traditional home for all incoming Yale freshmen, and were housed together in Vanderbilt Hall. The upperclass women were each assigned to one of the twelve undergraduate residential colleges and joined their male classmates in taking up residence within the colleges.

Brewster appointed Dr. Elga Wasserman as Special Assistant to the President on the Education of Women. In this role, Wasserman chaired the Planning Committee on Coeducation (1968-1969), the University Committee on Coeducation (1969-1973) and headed the Coeducation Office (established in 1969), overseeing all aspects of Yale’s transition to coeducation. Dr. Wasserman and her staff, including several undergraduate interns, worked on everything from the logistics of campus housing for the first group of women undergraduates, to locating career resources and mentors for these students, to the establishment of the Yale University Women’s Center.

Wasserman left Yale in 1972, and Mary Arnstein stepped into Wasserman’s role. From 1972 until 1977, when the Coeducation Office (by then renamed the Office on the Education of Women) was dissolved, a number of different committees and personnel at every level of Yale's administration continued Dr. Wasserman's work.