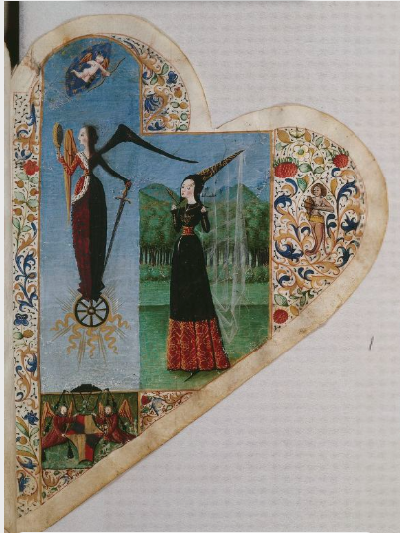 The Franco-Flemish chanson was intensively cultivated in Italy as well as in France and the Low Countries during the second half of the 15th century and the first years of the 16th. The prominent role of Italian patronage in the dissemination of this large repertory is underscored by a collation of the surviving MS sources, which brings to light the surprising fact that most are of Italian rather than French provenance....Among the best known of these sources are the ‘Central French’ chansonniers, a group of related MSS containing a repertory that belongs primarily to France. Once thought to come from Flanders or the Burgundian court, they are now shown to be from Paris and the areas along the Loire Valley occupied by the French royal court.

A beautifully illuminated chansonnier with a unique format is F-Pn Rothschild 2973 (‘Chansonnier Cordiforme’. It consists of 72 parchment folios bound in red velvet, shaped in the form of a heart. Copied probably in Geneva before 1477, the MS is the work of a single scribe, and was compiled for Jean de Montchenu. It contains 14 Italian and 30 French secular pieces, all anonymous. Identified composers include Du Fay, Bedyngham, Busnoys, Ockeghem, Morton and Binchois. (Hamm & Call, cited below).

Description and Inventory of the Manuscript