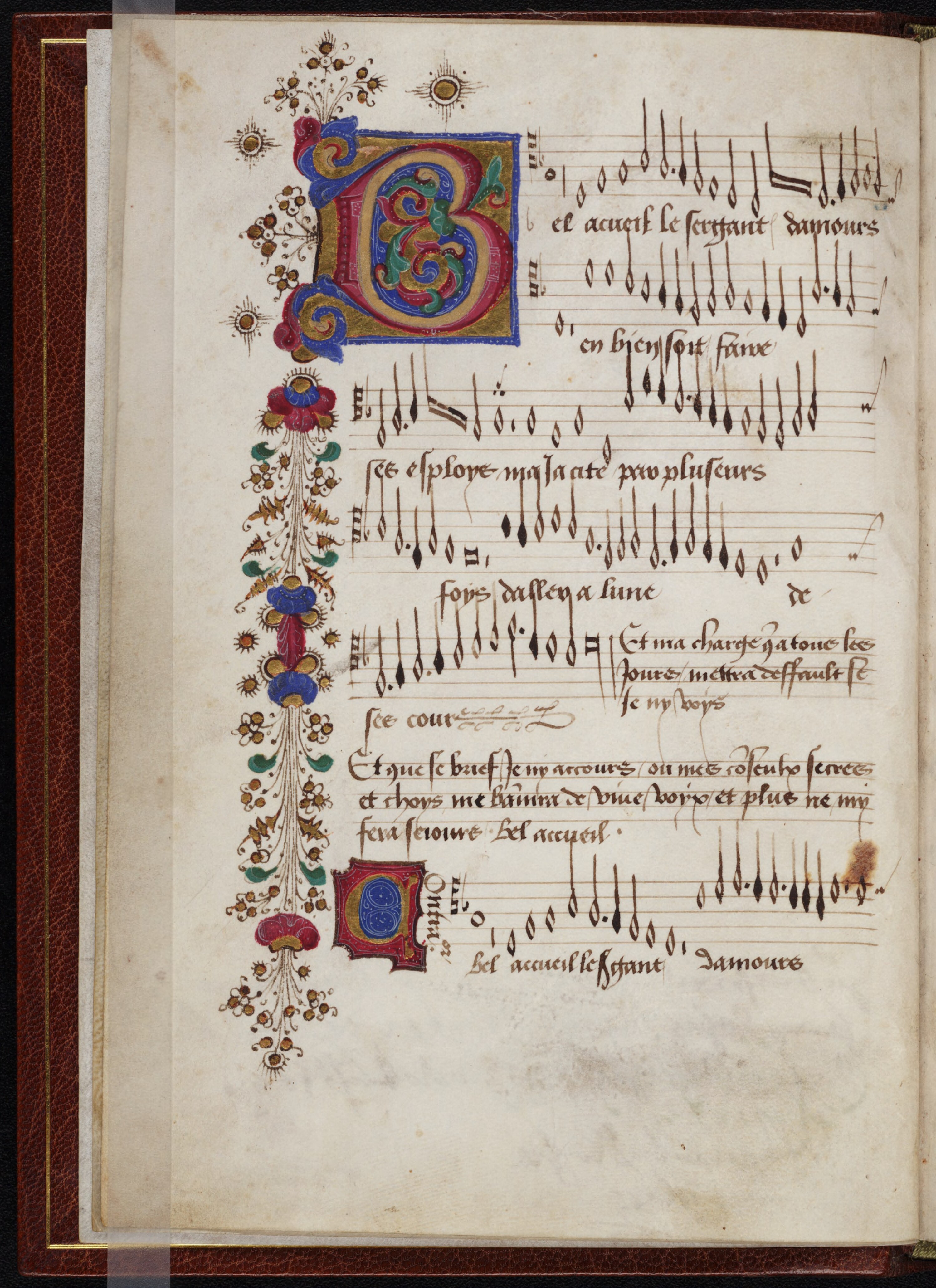 The most lavishly illustrated page of this manuscript. 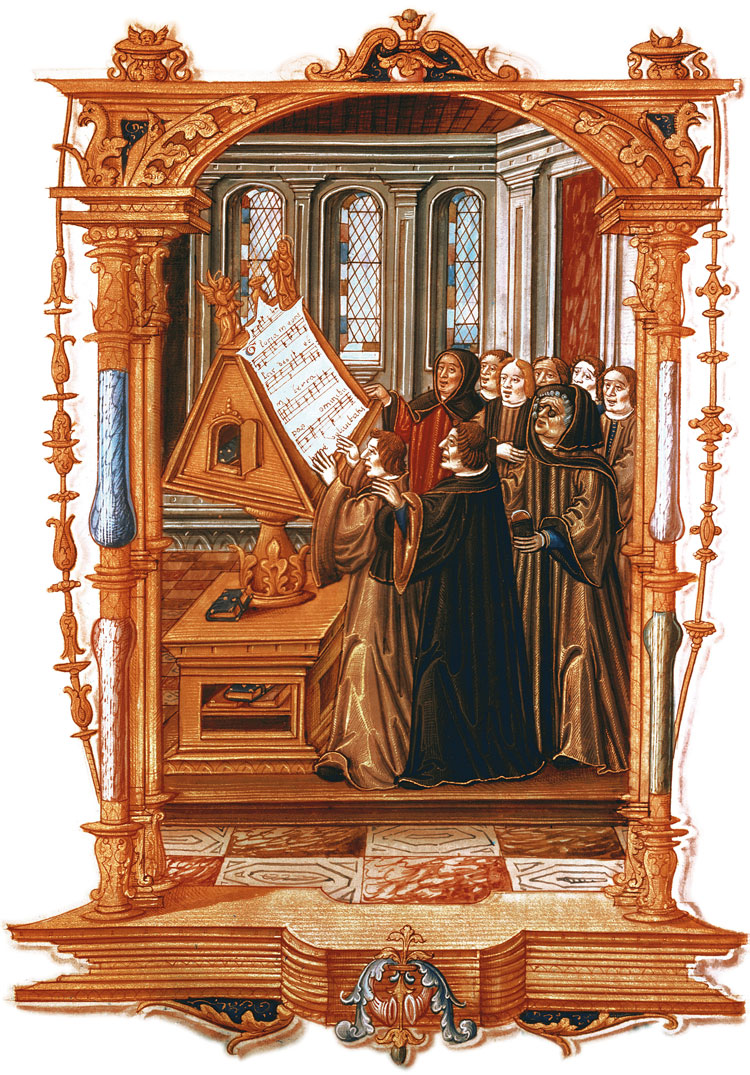 Ockeghem and his choir, depicted ca. 1523 in a manuscript from Rouen (Paris, Bibliotheque Nationale, Fonds Francais 1537, fol. 58v). Ockeghem is the old man in the lower right, wearing glasses. This portrait is from about 25 years after his death. Ockeghem was born in St. Ghislain, province of Hainault (in the French-speaking part of Belgium). He started his career as a singer in the cathedral of Notre Dame in Antwerep. In the service of the French kings Charles VII and Louis XI, Ockeghem became first the treasurer of the royal collegiate church of St. Martin of Tours, in the Loire valley, and also a canon at the cathedral Notre Dame de Paris. Through these appointments and his extraordinary gifts as a composer, Ockeghem became not only well known, but extremely wealthy as well. At his death, he is thought to have been nearly 100 years old. He may have been a student of Gilles Binchois and the teacher of Antoine Busnoys, who also have pieces in the Chansonnier. 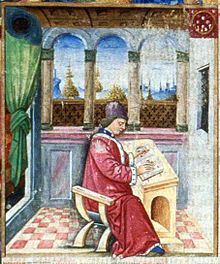 Tinctoris at his writing desk, a portrait (possibly from life) by the Neapolitan artist Cristoforo Majorana from a late fifteenth-century manuscript of Tinctoris’s treatises (Valencia, Biblioteca Universitaria, MS 835, folio 2). Tinctoris has been described as "a minor composer, but a theorist of encyclopedic ambition" (Taruskin, Oxford History of Western Music, vol. 1, chap. 12). He was the author of 12 theoretical treatises of music. He used the Latin form of his name, which means "dyer." It is known that he was born near Nivelles, in present-day Belgium, but no one knows which language he spoke (Flemish, French, or German) or his original surname. Around the time this manuscript was compiled, Tinctoris entered the service of Ferdinand I, King of Naples, where he remained throughout his career. He not only oversaw the compilation of the Mellon Chansonnier, but also composed two motets (sacred songs with Latin texts), that are considered to refer to Beatrice of Aragon (also known as Beatrice of Naples).

In Europe in the Middle Ages and Renaissance, kings were not just the formal head of state; they were the center of governmental power, assisted by their advisors. Kings had the power to tax, to call up armies (often leading them personally on the battlefield), and to imprison opponents, or otherwise influence the judicial system. Along with kings, the church and the aristocracy held most of the wealth of a country. Power and wealth were reflected at court by elaborate architecture, furnishings, art, clothing, and music. Royal weddings became elaborate spectacles, and the marriages of the children of rulers were negotiated by diplomats to ensure strategic alliances.

Most of the music that remains from this time was copied into manuscripts and represents the work of an elite group of musicians. Many of these composers were from the Duchy of Burgundy, in present-day northern France and Belgium, but they served in courts and churches throughout France and Italy. The music they created became the leading style of the day in western Europe, and is often referred to as Franco-Flemish, or Burgundian.

Music from this period is usually classified as sacred or secular. Sacred music was composed for the church, typically with Latin words, and often sung without instrumental accompaniment. The term a capella, meaning unaccompanied vocal music, actually comes from this custom: a capella means "as it is done in the chapel."  Most secular music (such as French chansons, or songs) was composed for the courts of kings or other members of the nobility. Instead of Latin, it was usually sung in the local vernacular language, such as French. The evidence for for how secular music was performed is not entirely clear. We have surviving instruments, illustrations in manuscripts and works of art, and sometimes a reference in a text to indicate different ways of performing. Modern performers make their own judgments for how to interpret these songs. They may use multiple voices together, or a solo voice along with medieval instruments or replicas.

Chansons often followed forms in which lines of text (along with their music) were repeated according to standard patterns. These patterns are called fixed forms (in French, formes fixes). The most common fixed forms were the rondeau, ballade, and virelai. The music is polyphonic--or composed for several voices: typically three for much of the 15th century, but often expanding to four by century’s end. These voices sing independent lines, and the resulting harmonies are very different from those of more recent music. Most of the poems set to music were based on the concept of “courtly love,” an idealized image of a lover worshiping his lady--faithful in the extreme, and carrying out all her wishes, no matter how unreasonable. 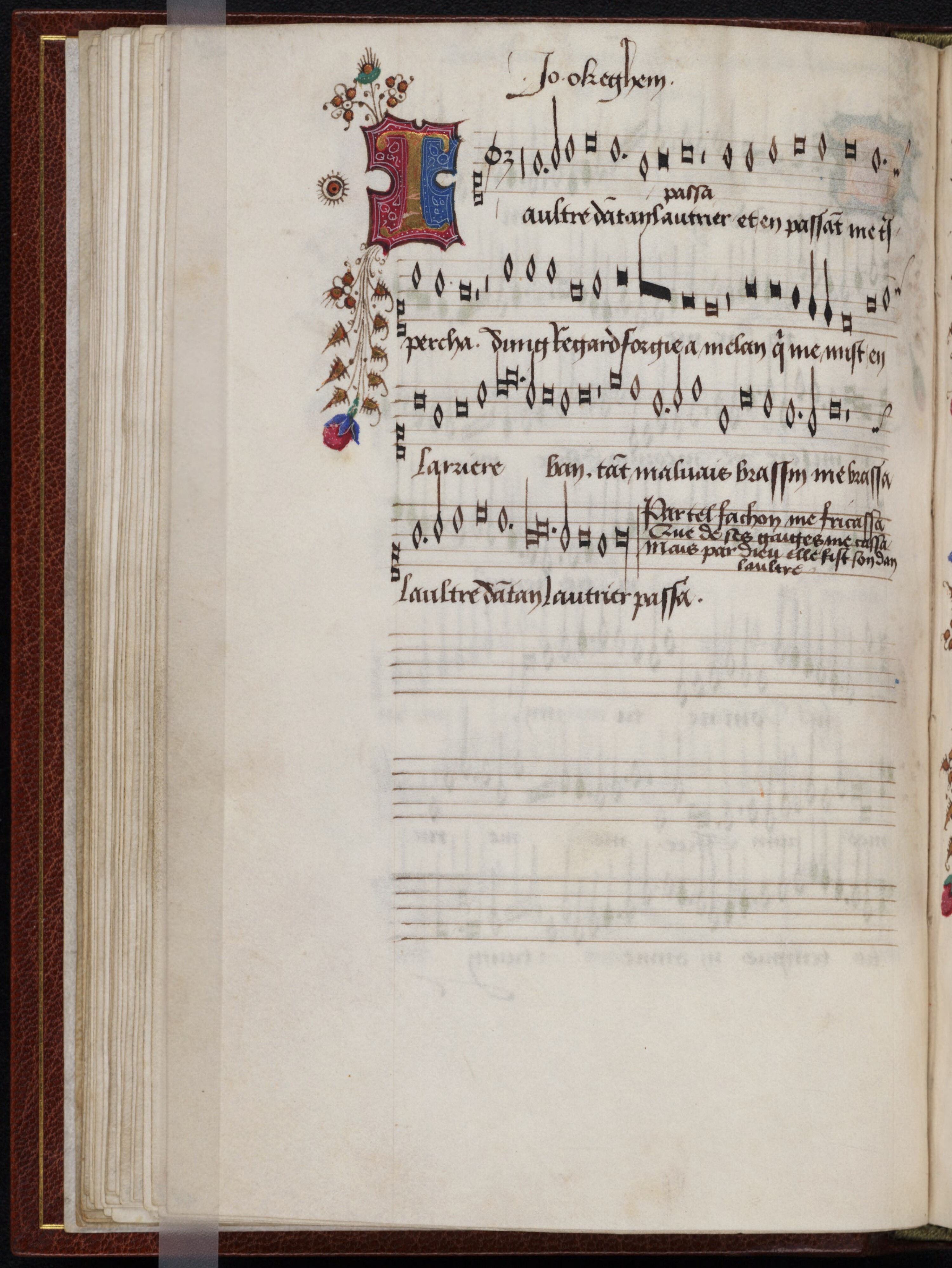 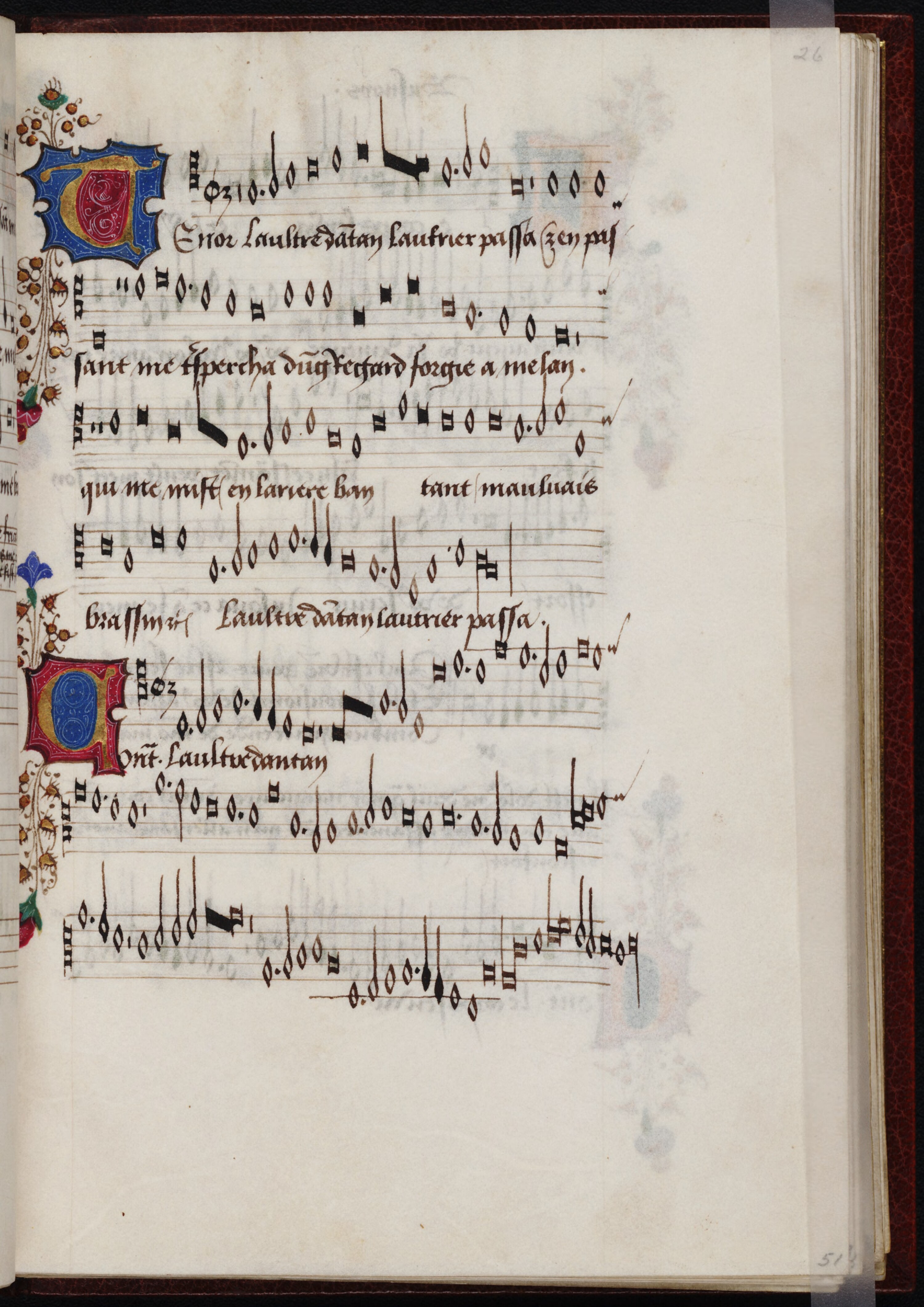 Notice how each part is written separately from the others, not all together as in the modern score below. Most chansonniers are very small books and not intended to be performed from. So they could be thought of as "presentation copies," something highly decorative. It is due to their great beauty that this music has survived in some cases.

More About the Mellon Chansonnier