Books at the YCBA 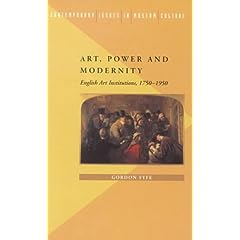 The YCBA has several unique resources for researching art in the Center's collection.

The Museum System (TMS) database, see reference desk for assistance
TMS is the object management system for the works of art in the YCBA's collection. From TMS we can provide you with basic information about an artwork (size, date, medium), and in some cases label text and a color image. One of the Reference Library staff can search TMS and provide you with a report based for your object(s).

YCBA Art Bibliography Database, use at Reference Library public computers
This database matches article and chapter citations to individual works of art in the YCBA collection, approx. 200 at the moment. Unlike other art databases, this resource gives you articles that deal specifically with your work of art.

YCBA Exhibition Catalogues
Most of the Center's focused exhibition catalogues are spread out among the stacks but many of the most comprehensive catalogues are grouped together on one wall shelf in the Reading Room.

YCBA Rare Books and Manuscripts Department holds primary sources related to many of the topics of the course. Handbooks, advertisements, first-hand accounts, panoramas, and contemporary periodicals are the types of materials you can find pertaining to the Great Exhibition, the Art Treasures Exhibition, the Royal Academy, the Grosvenor Gallery and the Cave of the Golden Calf. Search Orbis and the Rare Book Card Catalogue in the Reference Library for these materials.
Nineteenth Century Index: This massive index searches established indexes (Nineteenth Century Short Title Catalogue, Poole's Index to Periodical Literature, The Wellesley Index, Index to British Periodicals, Palmer's Index to the Times, and over 50 others) to provide citations (and links to full-text in some cases) for books, articles, and official publications published 1790-1919.
Times Digital Archive: Full-text access to the Times of London from 1785-1985. Pages are scanned from the original text, preserving the original layout and design of the page.
Historical Newspapers Online: Provides full text access to many UK newspapers including the Manchester Guardian (1821-2003) and The Observer (1791-2003).

Illustrated London News: The YCBA Rare Books and Manuscripts Department has a nearly complete run for the years 1842-1933 of the this heavily illustrated weekly newspaper, which is not cataloged in Orbis. See the card catalog in the Reference Library for details. Sterling Memorial Library has coverage from 1842-2002 in print and full coverage on microfilm. Check the Orbis records for detailed holdings.

Graphic: Illustrated Weekly Newspaper : Launched in 1869 as a challenger to the Illustrated London News. Print copies from 1869-1932 can be ordered from LSF and Sterling Library has a microfilm set 1869-1884.

Punch: Famous satirical magazine known for its political cartoons. The YCBA Rare Book and Manuscriptes Department has vols. 1-260 (1841-1979). They are not catalogued in Orbis but a record exists in the card catalogue in the Reference Library and they can be requested for viewing in the Study Room across the Library Court from the Library. Several other Yale University libraries carry Punch including Sterling Memorial Library.

The Studio: Illustrated Magazine of the Fine and Applied Arts - The Reference Library holds issues from 1893-1932 (N1 S9 Oversize).

Art Full Text & Art Index Retrospective: Includes citations, abstracts, and full-text articles from art publications dating from 1928-present. The Yale Center for British Art Reference Library holds print copies of many of the most important journals relating to British art history. To search the database, click on the "Online database" link next to the green check mark.

Bibliography of the History of Art: This index covers European and American fine and decorative arts from late antiquity to the present and includes items published from 1973 to the present. The database contains citations taken from journals, books, conference proceedings, essays, exhibition catalogues, selected art dealers’ catalogues, doctoral dissertations, and microform publications.

Arts & Humanities Citation Index (1975-present): Interdisciplinary index to books and articles covering the journal literature of the arts and humanities. Searchable by citation and tracks which books and articles are cited by whom.  Indexes 1000 journals fully and 5100 selectively (in the sciences and social science fields with relevance to the humanities).

Manchester Art Treasures Exhibition
The Rare Books and Manuscripts Department holds many ephemeral publications relating to the exhibtion. Search Orbis using: "Art Treasures Exhibition" as a subject phrase to view these holdings as well as books such as Art treasures in Manchester : 150 years on by Tristram Hunt (N5056.M35 H85 2007) in the Reference Collection.

Royal Academy - catalogues, exhibitors, reviews
The Reference Library holds a variety of materials relating to both the history of the Royal Academy and its annual exhibitions.
Contemporary reviews of the annual exhibitions can be found in the Times Digital Archive, Historical Newspapers Complete, and British Periodicals I and II, and in many cases, the full text can be searched for individual artists or works of art.

RA Summer Exhibition Catalogues: Extra-Illustrated: 1769-1925: Film B171
RA Archives 1768-1950 (minutes, annual reports, election book): Film B172
Periodical Press and Illustration
The explosion of the periodical press and the proliferation of illustrations within printed publications for the general public helped to expose fine art to an ever-increasing audience. The Reference Library holds many publications that examine print and illustration culture and its impact on the 19th century audience. The following are a small sample of the materials available.
Victorian Book Illustration: The Technical Revolution by Geoffrey Wakeman (Z257 W34).
The Victorian Woodblock Illustrators by Eric de Maré. ( NE1143.25 D45 Oversize).
How to Identify Prints: A complete guide to manual and mechanical processes from woodcut to inkjet by Bamber Gascoigne (NE860 .G37 2004).
Pictures to Print : The nineteenth-century engraving trade by Anthony Dyson (NE628.3 D97).
The Grosvenor Gallery
The Grosvenor Gallery (1877-1890) is crucial in the development of late-Victorian art as it regularly exhibited progressive artists who challenged Royal Academic style including Edward Burne-Jones and other Pre-Raphaelites, members of the Aesthetic circle, society portraitists, and the Victorian Olympians, among many others. Reviews of Grosvenor exhibits can be found in the Times Digital Archive, British Periodicals I and II, and Historical Newspapers Complete.

Society of British Artists
Founded in 1823 as a supplement, not a competitor, to the Royal Academy, the Society of British Artists provided British artists with another exhibiting oppotunity at a time when venues were scarce. The majority of artists represented by the SBA were not members of the Royal Academy. The Society gained some legitimacy, or at least notoriety, under the leadership of Whistler as well as the prefix "Royal" in 1887.

Bloomsbury Group
A group of artists, writers, and intellectuals living and working in the Bloombury area of London around the years 1910-1920. Some of its key contrbutors included Vanessa Bell (sister of Virginia Woolf), Duncan Grant, and Roger Fry, who founded the Omega workshops for the applied arts. Additionally, the economist John Maynard Keynes, authors E.M. Forster and Virginia Woolf (who founded the Hogarth Press in 1917) were key members of the group.

Camden Town Group
A group of Post-Impressionist painters formed by Walter Sickert in 1911 and named after a gritty North London neighborheeod. The group included Spencer Gore, Charles Ginner, Robert Bevan and others. Foremost among their subjects was London's urban life as it became increasingly modern in the early 20th century. The group, especially Sickert, depicted nudes in domestic settings, which paralleled the sexual frankness of the Bloomsbury Group and in literature by D.H. Lawrence. The group only had 3 exhibitions at the Carfax Gallery in 1911 and 1912.

Modern Painters: The Camden Town Group. Robert Upstone, ed. (ND468.5 C35 M63 2008+)
English Post-Impressionism. Simon Watney. (ND468.5 P6 W38+)
Sickert: Paintings and Drawings. Wendy Baron. (NJ18.Si12 B375 2006+)
Image Research
The Librarians at the Reference Library can help you get images of works in the Center's collections, but there are additional resources for digital images that you might be interested in. take a look at the Image Research section of this guide.

Additionally, the Database of Mid-Victorian Wood-Engraved Illustration contains nearly 1000 illustrations published in or around 1862. This database offers high quality images and iconographic searching.