Guide compiled by: Kent A. Anderson, for: Archives and Manuscripts Division, Yale Divinity Library. Microfilm of records held by the Archives of the Church Missionary Society.

Arranged in five sections: Standing Committee, Home Council, Area Files, Literature and Medical, and Cooperative Work. The Conference of British Missionary Societies was founded in 1912 as a direct result of the 1910 World Missionary Conference at Edinburgh, Scotland. The World Conference had established a Continuation Committee whose goal was to stimulate the foundation of national cooperative councils for mission. The CBMS, however, was not itself a missionary society. It served an important function for cooperation between missionary organizations at home and abroad. The collection documents the activities of the CBMS for the period 1912-1954. Material pertaining to the Standing Committee includes annual reports, issues of the Edinburgh House Bulletin and triennial policy groups devoted to the study of particular aspects of missionary purpose and policy. The Home Council material documents the education for mission of British churches, recruiting and training of missionaries. Area files contain correspondence with national Christian councils in Africa, the Near and Middle East, the West Indies and Asia. The Literature and Medical Sections provide information on the provision of literature overseas and on the financing and staffing of missionary medical institutions. Material on cooperative work reflects the CBMS' international and national contacts with other missionary bodies. The collection is important for studying the cooperation between missionary organizations and the religious, social and political climate in Britain and many other nations. Published finding aid in repository. Originals located at the School of Oriental and African Studies, University of London. Conference of British Missionary Societies Archives Microfiche. Record Group No. 93. Special Collections, Yale Divinity School Library.

The Dickinson Papers contain financial records, correspondence, legal records, account books, and other records of four generations of the Dickinson and Harman families relating primarily to their estates in Jamaica and secondarily to their English property. The Dickinsons were absentee landowners of Barton Isles, Pepper Penn, and Appleton Estate sugar plantations near St. Elizabeth's, Jamaica. The papers are part of the series British Records Relating to America in Microfilm.

Microfilm made for W. Appleton Aiken.

Papers of Heneage Finch, 1st Earl of Nottingham; Daniel Finch, 2nd Earl of Nottingham and sixth Earl of Winchilsea; Daniel Finch, 3rd Earl of Nottingham and 7th Earl of Winchilsea; and William Fermor, second son of Thomas Fermor, Earl of Pomfret. The papers consist of correspondence, speeches made in Parliament, drafts of legislation, petitions, account books, and legal papers of three generations of Finches. Also included are three short diaries kept by William Fermor, which relate to his travels in Europe and the West Indies, 1736-1744.

The records consist of twelve volumes of the confidential print relating to the West Indies, British Honduras and British Guiana. The confidential print is a collection of selected correspondence, memoranda and other documents printed for internal use in the Colonial Office or, in some cases, for circulation to the Cabinet. The records constitute Public Record Office group Colonial Office class 884 (PRO CO 884). Published finding aid available in Microform Reference. Originals are in the Public Record Office, London, England.

These journals offer a large, indexed reference source on Jamaica, a key British military and naval base during th era of Anglo-French rivalry.

The Humphrey Morice papers from the Bank of England.

The papers (Additional MSS 33028-33030 and 33046-33049) relate to America and the West Indies, 1701-1821, and include statistics, financial documents, and other papers concerning army and navy arrangements for ships and men in service in the West Indies and America, 1755-1756. Originals are in the British Museum, London, England. Published finding aid available in Microform Reference.

The papers consist of account books, legal records, correspondence, and memoirs of members of the Senhouse family, largely in connection with their plantations and trade in the West Indies. This is film 97406 of British Records Relating to America in Microform. Originals in the Cumbria County Council Archives Department, Carlisle, England. Senhouse Papers. Microfilm. Manuscripts and Archives, Yale University Library.

Slavery tracts & pamphlets from the West India Committee Collection now at the Institute of Commonwealth Studies.

Archival records from the United Society for the Propagation of the Gospel : West Indies, E series reports, 1901-1950.

* U.S. consul despatches, listed below, are arranged in chronological order. The records include reports to the Department of State from diplomatic representatives of the United States stationed abroad and may consist of notes, correspondence, clippings and other materials exchanged with foreign officials. Originals at National Archives and Records Service, Washington, D.C.

Accompanied by printed reel guide, F1776.2 U65 1987 (LC). "On the 12 rolls of this microfilm publication are reproduced record cards and correspondence of the Military Intelligence Division (MID) that relate to conditions in Cuba, Haiti, and the Dominican Republic (also known as Santo Domingo), -- from 1918 to 1941. The documents reproduced are largely reports from the U. S. military attache assigned to Cuba and his assistants, although there is a significant number of records from the Department of State in Washington, the diplomatic staff of the American legation at Havana, and the U. S. Marine Corps units stationed on the islands. The correspondence from which the eight files were extracted are part of Records of the War Department General and Special Staffs, Record Group (RG) 165"--Introd. 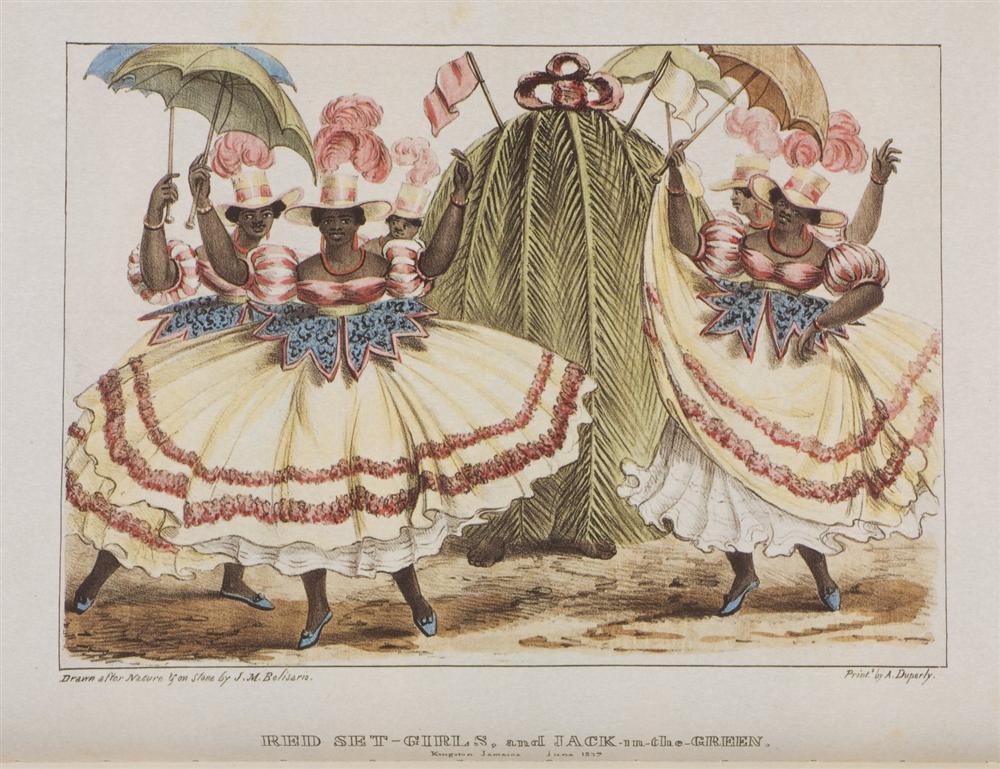 Belisario, Isaac Mendes, 1795-1859.   Sketches of Character, In Illustration of the Habits, Occupation, and Costume of the Negro Population, in the Island of Jamaica, Drawn after nature, and in Lithography, by I. M. Belisario, Kingston, Jamaica, 1837.  Yale Center for British Art.